I may never have known that if Tina hadn’t pointed it out. When she asked how we would be loving our bodies today, I really had to think about that. It occurred to me that I thought several discouraging things about myself and the way I looked before I had even left the house. That was no way to celebrate or acknowledge this day.

So this is how I am choosing to love my body today.

1. I will not argue when my husband tells me I am beautiful.

2. I will not feel guilty for eating real maple syrup at breakfast instead of the fake, sugar-free stuff.

3. Nor will I feel guilty for cleaning my plate at lunch.

4. I will feed my body foods that nourish me and give me energy, rather than ones that make me crash a few hours later.

apple with some almond butter

5. I will not avoid mirrors.

6. I will not criticize myself or my appearance when I do look at myself in the mirror.

7.  I will not feel bad about eating carbs.

8. I will sweat and get in a good work out, not because I long to be thin, but because I know it will make my body healthy and strong.

9. I will bake a dessert that is made with real sugar and real butter. And no, I will not call myself fat because I eat more than one. Who can stop at just one pumpkin whoopie pie? 😉

Seriously, this is the best pumpkin dessert I have made yet. I got the recipe from Marg at Running on Cupcakes. Click on the link for the full recipe. They are phenomenal!

10. And finally . . . I will send my picture to Heather at Faces of Beauty. Enough procrastinating. It’s time to celebrate how beautiful I am!

How did you love your body today?

Today was an awesome day. For the first time in a while, I had absolutely nothing to do. And I loved it. So Corey and I relaxed at home all day long . . . with our dog of course.

I started the day by sleeping in for the first time in a long time. My husband and I watched some mindless TV for a while before he made me a delicious breakfast. He was kind enough to make me some yummy blueberry pancakes, which I drizzled with some real maple syrup.

First time I’ve ever had real maple syrup and it was delicious. Mmm . . .

Not too long after that, I managed to do a nice workout. 30 day shred and then 30 minutes on the elliptical. I’m surprised I managed to do a workout on a day reserved for relaxing. But what can I say? My body craves exercise.

I didn’t actually get hungry until kind of late in the afternoon because of my late breakfast. But I knew that my hour-long workout required some kind of fuel so I prepared something light.

Lunch was a whole wheat pita with hummus, cheese, spinach, and some cucumbers. It was very light and refreshing.

The best part of the day? Apple Scones! I have been in the mood to bake all week long and I thought today would be the perfect time. I have also wanted to try my hand at making scones so Apple Scones it was.

Check out the chunks of apples!

I will post the recipe for the Scones below. They were so tasty! Full of cinnamon and apple flavor.

The rest of the day was spent just relaxing in front of the TV (of course) while my husband prepared a rotissierie chicken for dinner. Even Callie was feeling extra lazy today.

And of course Corey needed my help removing all of the chicken from the bone . . . 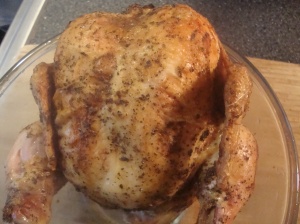 Corey is so funny. He will clean up after Callie when she is sick and throws up, but the thought of removing any kind of meat from a bone makes him sick. That’s okay though. I’ll go ahead and let him think he’s got the easier job. 😉

I may have eaten a few pieces of the skin while I was removing everything.

Callie even wanted in on some of the chicken action.

Along with the chicken, we had baked potato and fresh corn on the cob. So good!

And now Corey and I are attempting to make Pumpkin Spice Bagels. I’ve never made homemade bagels before so I will let you guys know tomorrow how they turn out. They may be done kind of late, but that’s okay. Tomorrow is my day off! This has been a very relaxing weekend and I have been a little stressed out at work, so I needed a couple of days off. Below is the recipe for Apple Scones. Enjoy!

I have recently fell in love with sweet potatoes. It was only a couple of weeks ago that I discovered sweet potato fries. And before that, I don’t even remember the last time I tried a sweet potato. Maybe never? I know, it’s hard to believe. But ever since I first tried sweet potato fries, I have had them several times because they are so tasty and much more nutritious than regular potatoes.

Several weeks ago, I checked out a cookbook from the library, Vegan Cookies. In this book, I saw a recipe for Sweet Potato “Blondies” that I have been dying to try. A dessert that has a vegetable in it has to be good for me, right? 🙂

It all started with a single sweet potato.

I did make a few changes so that it wasn’t vegan (let’s face it, I’m no vegan) and I used white chocolate chips instead of nuts (I can’t really eat nuts right now and regular chocolate gives me migraines). Also, I made a few changes in the process because it called for sifting and I don’t have a sifter. They still came out so incredibly tasty! They are sinfully good, extremely moist, and taste like an actual blondie. Make these now!

mixing the batter with some delicious white chocolate chips

the beautiful blondies before going into the oven

the blondies after being cooked . . . pardon the big hole in the middle. My husband REALLY wanted to make sure they were done.

Pour mixture into prepared pan. Bake for 25 to 30 minutes, checking the bars at 25 minutes by inserting a toothpick into the center of the cake. Bars are done if the toothpick comes out mostly clean. Be careful not to overbake. Allow the bars to cool for 30 minutes for the texture and flavors to fully develop. Makes 12 bars. 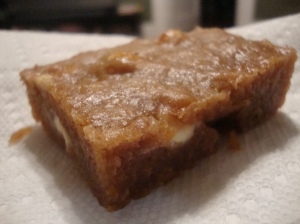 I love pumpkin. It totally reminds me of fall and even though the weather is still very summery, I am hoping that by baking something with pumpkin in it, I can somehow wish the Fall here just a little sooner. A girl can dream, right?

The thing is I had no idea there was even a can of pumpkin in my cabinet. (Note to self: clean out cabinets.) A few weeks ago, my husband and I were looking through them and I was delighted to find a couple of cans hidden. Yay! So I was dreaming of pumpkin dishes. I found a dish for Pumpkin Bars on Sparkpeople. I actually made a few changes and modified the recipe a bit. These bars could totally be made into muffins as well. Yummy! I was very happy with the result: moist and not too sweet. Yummy. 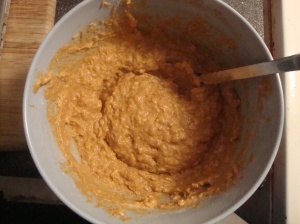 warm from the oven

Mix all dry ingredients together. Add pumpkin, milk, applesauce, and slightly beaten egg. Mix lightly (do not overmix). Add nuts if you are using. You can make muffins if you want or spread batter in 13 x 9 pan (lightly greased with nonstick cooking spray). Bake at 375 degrees for about 15 to 20 minutes, use toothpick to see if they are done. Do not over cook.