“You don’t make friends with salad”

Every time I make a salad, I think of the Simpsons episode where Lisa becomes vegetarian and the family sings that song, “You don’t make friends with salad.” Catchy tune. But whether salad wins you friends or not, tonight definitely felt like that kind of night. I had a late snack so I wasn’t even hungry when I got home from work. Since Corey is out of town on business, I was on my own. Whenever he is out of town, I want to do as little cooking as possible. Cooking for one is really no fun. I watched TV for a bit and then hit the elliptical for half an hour. I had already went out on a 30 minute run this morning, but I usually like to work out for an hour total whenever I do work out. After my workout, I definitely needed some sustenance.

I decided to make a salad out of some leftover rotiessirie chicken Corey had made on Sunday and some spring mix lettuce I had purchased at the store earlier.

I had originally wanted some spinach as the base for my salad, but this was all they had by this brand at the store. And it was organic and I had a coupon, so you can’t beat that. I know that iceberg lettuce is healthier, but for some reason I can never bring myself to eat anything but iceberg when it comes to sandwiches. Maybe that’s something to work on. But when it comes to salads, iceberg is definitely boring (not to mention lacking in serious nutrients). So I try to get just about anything else (usually spinach).

Regarding the dressing, I actually took a chance and made my own. I can’t have store bought dressings because they have a lot of ingredients in them I can’t have (due to my headaches, but more on that later). Last time, I tried to make my own dressing, it didn’t turn out well at all. But this one turned out really well. It has a base of fat free mayo, some vinegar, fat free milk, and some different herbs. I even put a pinch of cayenne pepper to spice it up. I may even use this dressing as a veggie dip. 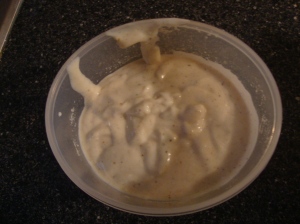 The salad tasted wonderful and really hit the spot. I even added some yellow and red peppers that we had gotten at the Farmer’s Market last week.

For dessert, I had some Breyer’s all natural strawberry ice cream. Yummy! My favorite dessert right now. And now I am so incredibly tired. Went to bed late last night and then forced myself to get up at 5:45 am to go for a run this morning. It was extremely hard to drag myself out of bed, especially since my husband wasn’t here to drag me kicking and screaming. But I managed on my own. I had energy for most of the day, but now I am fading. I am watching Bachelor Pad on my DVR (which I can’t believe I am actually getting into) and then it’s off to bed!