I can’t believe it’s the first of December! Where did this year go? It just hit me that there are only three weeks until Christmas. Time to get shopping. Corey and I have already purchased gifts for several people online. I adore online shopping. I don’t have to deal with parking or crowds. Best of all, I can do it in my pajamas! I may or may not have done some shopping this evening wearing my pj’s. 😉

I have discovered a new love . . . Trader Joe’s sunflower butter.

I have talked about my dislike of almond butter before. I think I tried the wrong brand. This sunflower butter was the perfect consistency (very creamy) and tasted remarkably like peanut butter. Not the same, but close.

Breakfast: pumpkin pancakes (the last of them) with some sun butter

When I talked about the fact that Trader Joe’s wasn’t that great, I think I just didn’t give it enough of a chance. First their pumpkin cream cheese, then triple ginger snaps, and now sunflower butter. I am slowly warming up to them.

After I bought this jar of sunflower butter, I discovered that I have five different kinds of nut/seed butters! 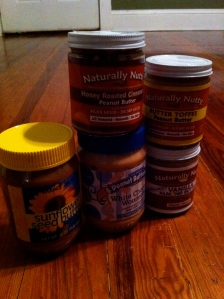 Looks like I’m starting quite the collection. I better start eating these before my husband accuses me of hoarding food. Wouldn’t be the first time.

I do have kind of a rant today. Last Friday, I went online to PetcareRx and ordered some Advantage Multi for Callie. It is way cheaper online than at the vet and I have never had a problem with this before.

Midmorning snack: a juicy pear . . . I swear, this picture did not look neon until I downloaded it.

Apparently, the order was stopped because my vet said I was required to pick up the prescription in person.

Lunch: the rest of my chili. It was a hearty bowl that was super filling.

This irritated me on two levels. First, this company didn’t bother letting me know that I had to do this. The only reason I found out is because I went online to check the status of my order. Since I placed this order several days ago, I feel they should have contacted me (by email or phone) so that I would know what to do. Otherwise, I would just be waiting around for medication that isn’t going to come.

Second, my vet has never done this before. She has always validated my prescriptions. When I called them, they said it was a “new” policy. So new that it wasn’t in place a week ago when I called. So now I have to drive all the way down there, pick up the prescription, and mail it to PetcareRx (they don’t accept a fax). 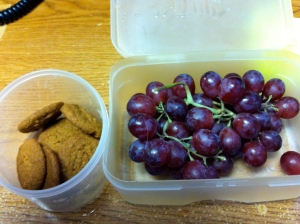 So now it’s going to be that much longer until Callie gets her medicine. I’m sure she’s happy about it. I am not pleased with my vet’s policy at all. I really feel that they only instituted it so that it would be more inconvenient for people to order online. They want me to buy it from them. Ha. No thank you.

So that is my little rant for the day. Thanks for listening! 🙂

Now onto happier things . . . sort of. I get the house to myself tonight, which I enjoy. But Corey is out of town until Friday, which I don’t like. His upcoming travel schedule may make it possible for me to get stuff done around the house. That is, if I’m not incredibly lazy and just park myself in front of the TV instead.

Dinner: bowl of brown rice, corn, cheese, broccoli, a hamburger patty that I cooked, and generous amounts of ketchup and mustard. This was so delicious!

Speaking of holidays, I am in the mood to do some baking. But what should I make first? Sugar cookies? Gingersnaps? Whatever I do bake, I know that it will be the first dessert I have made in a while that won’t have pumpkin in it. 🙂

A desperate need for cookies and legs of jelly

Today I was in desperate need for something to fulfill my sweet tooth. There were no sweets in the house, besides grapes. And fruit just wasn’t going to cut it. I did make a pit stop at Whole Foods today and I was very proud of myself for resisting temptation there. I bypassed the coconut macaroons and just barely drooled over the jumbo sugar cookies in the bakery cookies. Note to self: do not go to grocery store hungry. You would think I had already learned this lesson. Alas, I have not.

I had a major craving for something that I have made several times before: Vanilla Wafer Cookies. The cookie is a mix of vanilla and buttery, sugary goodness. 🙂 I initially found the recipe on Sparkpeople. I have modified it a little bit each time to make it better and the result is a really nice, crispy cookie.

In a large bowl, cream butter and sugar until light and fluffy. Beat in egg white and vanilla. Combine dry ingredients; add to creamed mixture and mix well. To form cookies, take 2 teaspoonfulls worth of dough and roll into a ball. Drop onto greased baking sheets. Bake at 350 degrees for 12 to 15 minutes or until golden brown. Remove to wire racks to cool. Should make about 35 cookies.

I can't stop at just one!

On another note, I had an awesome run tonight. I went two miles. Tonight I took my Ipod and maybe it was because it was a stressful day or maybe it was the fast music I was listening to . . . but I really pushed myself tonight. When I was almost home, it was technically going to be my cool down period but then a fast song came on that just inspired me to keep running. And that was a little bit of a miracle since my legs were feeling shaky at that point. But I pushed it and it felt great. I was going to do another workout when I got home, but my legs were like jelly by that point. Seriously . . . quivering like jelly and I had to sit down. Or bake cookies. Whatever. 🙂

Also, I tried some sunflower seed butter that I had heard about. Granted, it was not the Trader Joe’s brand that I heard was awesome. I bought this brand at Whole Foods. And I did not like it at all. It was a waste of $5. It was very bitter. I had heard good things about the other brand, but I’m not sure how I feel about spending the money to try it out again. Maybe I should wait until I can have peanut butter again. But I miss peanut butter so much! I guess that just goes to show you there is no substitute for the real thing.